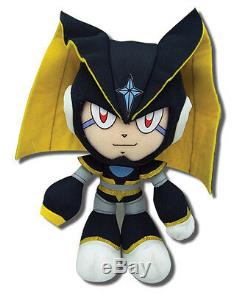 Bass, known as Forte in Japan, is a Robot Master created by Dr. Wily to imitate Mega Man's design, along with Treble, an imitation of Rush's design. He was created based on a research conducted on Mega Man with the intention of surpassing his power sometime during or before the events of Mega Man 6, and made his debut in Mega Man 7. Bass is the prominent anti-hero of the Mega Man classic series, and his goal is to become the most powerful robot in existence.

Although Bass and Mega Man are rivals, at times they team up to take down mutual enemies of the two. Despite being created by Dr.

This item is in the category "Collectibles\Animation Art & Characters\Japanese, Anime\Other Anime Collectibles". The seller is "egamestar" and is located in Alhambra, California.