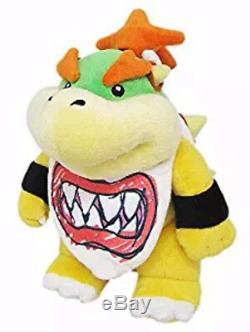 Licensed Little Buddy 1424 Super Mario All Star : Bowser Jr. Condition: New Status : IN STOCK SKU. Is Bowser's only child, the Koopa King's heir to the throne and the secondary antagonist in the Mario series. First appeared in Super Mario Sunshine and has helped Bowser kidnap Princess Peach and battle Mario and Luigi in many subsequent games. Wants nothing more than to do his father's evil will and Bowser's rarely seen emotional side is often brought out by his interactions with his son.

Inherited his father's bad attitude, evident in his motto Grin and bear it. When that don't work, grin and crush it. He is also bratty, spoiled and short tempered, though in Mario Party DS it is stated he has a lonely side. His favorite hobbies are stealing cookies, causing trouble for people and scribbling (which may explain the widespread Graffiti that was made at Isle Delfino). However, he seems determined to defeat Mario in a fair fight in order to prove his power.